Nonprofits must direct their marketing dollars and resources where they’ll do the most good. But while most charities don’t have multi-million marketing research budgets, they do have access to a wealth of statistics—who is giving, how much and to whom. With the New Year around the corner, nonprofits should take a good hard look at their numbers to ensure that they are targeting the groups and segments most receptive to their message and mission.

According to the Philanthropy Roundtable Almanac, America is the most generous of nations, giving roughly 2% of its GDP or about twice as much as Canadians and three-to-15 times as much as other developed nations. Here’s how the numbers break down across demographics.

Sixty-Seven Percent of U.S. Households Give to Charity

More than two-thirds of U.S. households give to charity. What’s most interesting, Americans of all incomes give at roughly the same level, an average of 2 to 3%, with the exception of those at the bottom of the wealth scale.

Looking more closely, the two factors most frequently associated with giving are marital status and college education. Married people donate at rates 1.6 times higher than their unmarried peers; and those with a degree are 1.5 times more likely to give than those who skipped college.

These statistics underscore common logic: donors in stable households with reliable incomes are more likely to feel like they have enough to help others.

Religious Charities Are Most Popular

From education to health, arts and culture, Americans give to many different kinds of charities, with religious charities garnering the biggest share. As a whole, Americans give 39% of charitable dollars to religious organizations, which encompasses causes that are explicitly religious in nature, as well as those that support secular efforts like help for the poor or health and education.

In line with these findings, Americans who attend religious services 27 to 52 times per year give at higher levels than their non-religious counterparts to both religious and secular causes.

Rural States and the Bible Belt Lead on Giving

High-profile philanthropists like Michael Bloomberg and Bill Gates often get a lot of media attention for their charitable work. But when you look at where the money is coming from, the lion’s share isn’t originating from the coasts, it’s flowing from the middle of the country, rural states and the Bible Belt, where religion is a bigger part of the culture.

According to the Chronicle of Philanthropy, the most generous state in the country is Utah (which has a large Mormon population), followed by Bible-Belt states like Mississippi, Alabama, Tennessee, Georgia and South Carolina.

On average, Utah residents give 6.6% of their income to charity, whereas in New Hampshire—which is 50thin the nation for giving—Granite State residents give an average of 1.7%.

A Little Goes a Long Way

Even in the age of eye-popping billion-dollar donations, small individual donations constitute the bulk of American generosity. Every year, individuals—giving through both personal gifts and bequests—donate four times as much as large corporations and global foundations like the Bill and Melinda Gates Foundation. 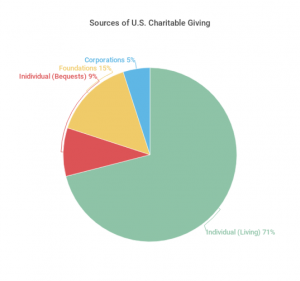 For nonprofits, the business of philanthropy isn’t always what it seems on the surface. It’s important for charities to dig deeper to understand who’s giving so that they can engage with the donors in the most effective way.